Calgary-Bow is a Provincial Electoral Division in west Calgary. It is the second largest riding in Calgary, by population, with over 51,000 residents and contains 36,993 voters, which is the third largest in the city. In the 2019 provincial election, over 25,023 voters (67%) cast their ballot in Calgary-Bow. Demetrios Nicolaides and the UCP received 13,987 votes or 56%, the highest total number of votes in the riding's history and the highest share of the vote obtained by any winning candidate in the last 20 years.

The electoral divison was first created in 1971 and was held by the Alberta Social Credit, Progressive Conservatives, NDP and UCP. The Bow River serves as the riding northern boundary and extends south to Bow Trail. It borders the community of Spruce Cliff in the southeast and Market Mall in the northeast and in the west, borders the city limits. In previous years, the riding included communities both north and south of the river, which is why the riding is named after the river. The riding also includes Canada Olympic Park, home of the 1988 Calgary Winter Olympics and thus includes the iconic ski jumping facilities.

Calgary-Bow is comprised of the following communities: 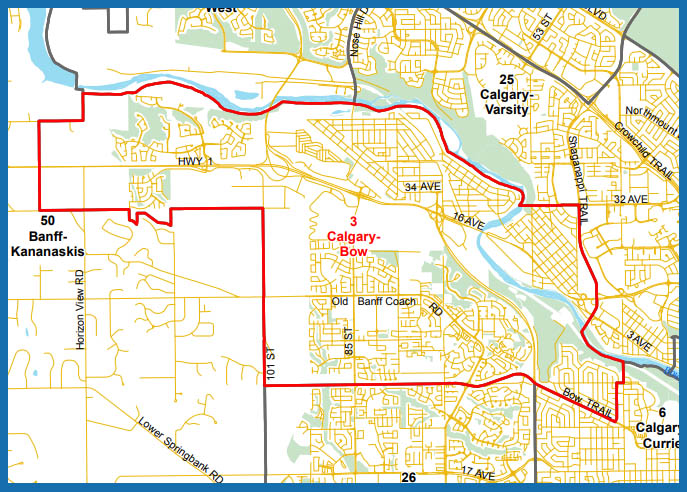 Find out more about Calgary-Bow (2016 Census)